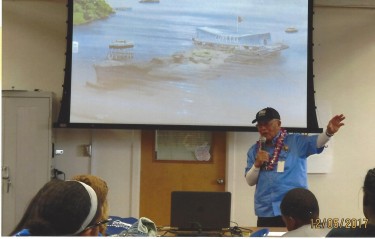 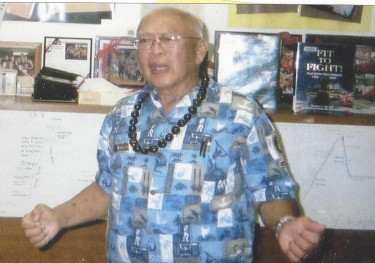 On a research trip to Pearl Harbor, I was told of a wonderful man who volunteers his time at the Pearl Harbor Visitor Center and speaks to thousands of school children from around the world. His name is James “Jimmy” Lee, and like the Jimmy in my book, he grew up on a farm near Aiea on the shores of Pearl Harbor. Jimmy and his family are Chinese American.

Jimmy’s farm looked much the way I describe it in War on a Sunday Morning. Jimmy was the sixth child in his family and had lots of chores on the farm, including milking the cows, feeding the pigs, tending to the vegetable patch, etc.

On the morning of December 7, Jimmy, who was 11 years old, had gone out to feed the pigs when the Japanese began their attack. He sat on the railroad tracks and watched the bombs fall.

“We were not afraid at first,” he said. “We thought it was a war game, and I ran to see the show.”

As in my story, Jimmy and his family did seek shelter toward the mountains in the Waimalu Valley. When he returned home, Jimmy realized his best friend and neighbor, Toshi Yamamoto, had disappeared. The Jimmy in my book shares a similar story. In real life, Jimmy did not find out until 71 years later what really happened to Toshi, and how he and his family were forced to leave their home because they were Japanese.

A few days after the attack, Jimmy had gone to get the family cow, which had been tied up in the cane field. There was a curfew on and it was still dark. A soldier appeared out of nowhere and pointed his gun and bayonet at Jimmy. Though Jimmy was Chinese, the soldier had mistaken him for a Japanese invader. That was a story too good not to appear in my book!

When Jimmy grew up, he joined the Hawaii Air National Guard and was later drafted into the Army. He went on to serve in the U.S. Army Corps of Engineers and eventually retired after 42 years of federal service. He enjoyed traveling and spending time with his ever-growing family. Jimmy passed away on November 25, 2019.